In Search of Diversity

If the suburbs teach us anything, it is that diversity does not work.
Well, not diversity in it’s idealistic form that many discuss these days.

I used to live in the suburbs…

When I consider my old block on my street I would have to take that first statement back, from a completely literal standpoint. All of my neighbours were from different ethnic backgrounds, which in and of itself is pretty spectacular. And from my anecdotal research on suburbs, it is also quite unique. There was something cool about sharing space together there, and having very different starting points before we arrived. We quite literally represented a small version of the Canadian mosaic.

I say that with pride, although I’m pretty sure I had nothing to do with making it happen. The housing market and cheap land probably set the stage for us all to be there. So I am thankful for the fact that things worked out the way they did, because normally this would not have been the case. Like tends to beget like in the suburbs, so the fact that it didn’t happen there makes me glad.

But suburban diversity is not the same as urban diversity. I realise this every time I sit downtown for a coffee or a meeting. A friend who grew up in a more diverse and densely populated area than I, upon visiting our new home the first time, referred to the neighbouring houses as ‘bunkers’. He said this as we watched a neighbour pull up, the garage door opened, the van slipped into the entry, followed by the door closing immediately after. I hadn’t thought of it this way until that point. The classic indictment against the suburbs: You have no reason to talk to anyone. True to form, my block may have been diverse, but no one household shared an expression of this diversity.

It is amazing how soon we all adapt to our surroundings. I grew up in the country, so when moving to the city, I became a bad neighbour. Or a good one, depending on who you talk to. I made eye contact, talked to people who passed by on the street, did not keep to my space well, and generally acknowledged the presence of others. I have adapted to my surroundings, which sometimes means even though you can hear/see/sense the presence of other humans within close proximity, you pretend they are not there. I tend to think true diversity acknowledges the presence of others, so I’m not sure how well this could ever be achieved in suburbia.

Sitting downtown recently helped me realise that diversity may mean more than just proximity. A full coffeeshop, a wide variety of racial representation, and a plethora of lifestyles, all residing together. All at ease with many differences at once. No eye contact, no interaction, no talk. The lack of human acknowledgement was more evident than on my street because the proximity was so much lesser than that of my neighbours. Diversity is represented here, but idealistically it does not seem evident. When people coexist they tend to forget the humanness of the people around them.

Diversity as represented in this 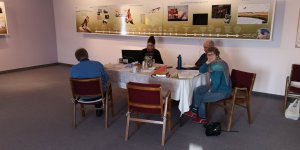 picture is something of a goal in any organization. A difference of ideas, ways of communication, perspective and personality, yet still striving to work together in harmony. When we acknowledge our differences and then choose to see those differences as helpful to our own sense of self, and our common good, we bring honour to others. And through this I believe we become better people.

I suppose the bunker theory makes sense; only some are built, and others are simply imagined.

I walk with people to help them find who they are, where they are, so they can journey to the next step in their life and work. Coaching and consulting through community, mentorship, and pursuit. View all posts by Eric Friesen